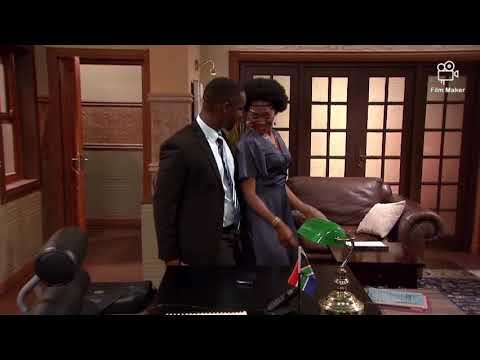 Secrets in Muvhango are out now on October spoilers! Chief Azwindini is going to take the blame and confess to killing Tshanamo (Tenda’s brother) this month to save his son. This after Tenda finds evidence that will potentially send Vutshilo to prison and destroy Vutshilo’s (Azwindini’s son) life.

Azwindini will bribe Tenda and sell some of his MMC shares to Tenda in order to save his son from going to prison. Azwindini’s youngest wife, Mpho whose been having affair with Tenda for ages, is going to confess to missing period. Mind do she was told that she couldn’t conceive.

The ancestors were just punishing her for betraying her ex-boyfriend who is also a sangoma. Mpho dumped him for Azwindini and the two couldn’t conceive. I always suspected that Maine put a spell on their womb so she couldn’t have kids with Azwindini.

It looks like everything is going to be difficult for Azwindini as Tenda is going to have his company too. Azwindini’s always gotten away with everything and fans will be relieved that he will finally pay for impregnating Tenda’s wife. Perhaps she will come back to Thathe when she learns about Mpho and her ex-husband; Tenda.

Fans always suspected that Sechaba won’t make it to the festive season because of cancer. And knew that he has always stayed away from his family because they are cold and uncaring. Imani will propose to Sechaba in October to which he will accept.

When Imani finally meets Sechaba’s mother she will definitely understand why Sechaba stayed away from her. The two will bud heads because of Imani’s past. His mother knows that Imani has a sex tape and won’t approve of her son’s wife.

At one event, either their engagement or Sechaba’s book launch, He will throw up blood on Imani. He will be rushed to the hospital where Sechaba will eventually die.

Actors From Skeem Saam And Their Cars