In October Teasers Uzalo will see the current leader of the Kingdom Church under immense pressure to resign following an entanglement gone wrong affair with fellow church members. The former pastor, Qhabanga is hell burnt on getting his seat back as he believes that he is the chosen one to lead the church. And Qhabanga will also dick evidence to put Mbatha down.

“Qhabanga is infuriated. He is now more determined than ever to overthrow Mr Mbatha and resume his old job,” says Siyabonga.

But it’s going to need Qhabanga to go for the jugular to reclaim his seat as the pastor because Mr Mbatha isn’t going down without a fight.

He (Thabo Mnguni) has done more damage to KwaMashu Kingdom Church in the one month that he’s been pastor than any other church leader since Uzalo started in 2015. He manipulating some of the choir ladies to have sex with him in exchange for the lead singer position, he’s also stealing church funds. But his devious deeds are coming to an end this fortnight when his predecessor Qhabanga (Siyabonga Shibe) learns of his misconduct.

For Qhabanga, returning to his position has nothing to do with moving back to the big house after the church elders kicked him and his wife Gabisile (Baby Cele) out when Mbatha was appointed in late August. “Getting his old job is rather for the good of the congregation,” says Siyabonga. “If you’ve been following Qhabanga’s journey, you will recall that he had a dream [in 2018] where he heard God’s voice instructing him to become a man of the cloth. Qhabanga believes that he is the chosen one – and he won’t stand back and watch as Mr Mbatha destroys his church,” explains the actor. 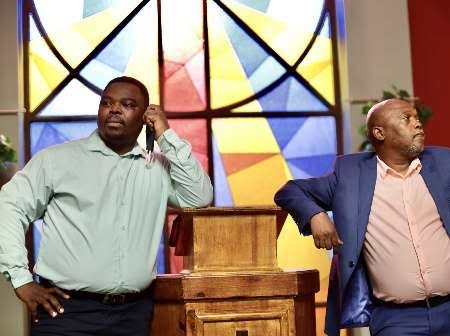 Qhabanga considers confronting Mr Mbatha in front of the congregation but Gabisile stops him. “Qhabanga was fired because he had a series of emotional breakdowns following a personal crisis. If he causes a scene and lashes out at Mr Mbatha in public, he might ruin his chances of becoming a pastor again,” says Siyabonga.

Gabisile, being the wise woman that she is, suggests that her husband forces Mr Mbatha out of the church in private. That way, no one will know that they’ve ousted him. Though Mbatha is preparing one of his sermons, Qhabanga walks into his office and demands that he steps down or else Qhabanga will expose his evil doings to the church.

“Guilty, Mbatha is left with no other choice but to resign. Although I can’t tell you all the details, Mr Mbatha will ensure that his last night at church is one to remember,” adds Siyabonga.

But that’s only half the battle won – the church elders don’t entirely trust Qhabanga to return to the pulpit. “He will have his work cut out for him trying to prove himself to the congregation again. But if he can overthrow Mbatha, winning back the elders should be a breeze,” explains the actor.

Njeza was caught between two women, and Nkunzi hurt a loved one to prove a point. Elsewhere, MaDongwe found out that her fiancé Mr Mbatha was cheating on her.

Uzalo vs Generations The Legacy salaries